Finally, after leadership narrowed, the long awaited market sell-off may have begun.  A combination of sequestration and lack of Fed’s easy money commitment (Economist’s View) look to receive the blame.

Smells like a fund blowing up in goldbug land.  Or worse, Long-Cycle Metals Have Peaked says Citi in Barron’s. “The charts look potentially very ugly in the metals” says Peter Brandt.  Consolation for the gold bulls at Bespoke.

“Consider semiconductor giant Intel (INTC), for example. Intel takes sand (silicon) and applies decades of research and engineering to turn it into the heart of the modern world – computer chips. The moat around its business is both high-tech expertise and intellectual property. It is difficult (impossible, really) to compete against Intel in the microprocessor market, where it has tremendous scale.
That’s because most of Intel’s costs are fixed. It takes a lot of capital to build fabs (the plants where Intel’s chips are made). It takes a lot of capital spent on research and development (R&D) to produce faster and faster chips. And it takes a lot of money to hire and retain the brilliant engineers to design the chips and the patent attorneys to protect the chips. But it doesn’t cost much at all to make each additional chip. This lack of marginal costs (and the large size of the fixed costs) is what makes tech stocks so interesting for investors…
This fact makes the microprocessor market a natural monopoly. As Intel gets bigger, it can afford to spend more and more on R&D… which makes its chips bigger, faster, and better than its competitors’. The R&D makes its products better in a tangible, objective way. That, in turn, allows Intel to sell more and more chips at higher and higher prices… and earn wider and wider margins…
Last year, Intel earned more than $20 billion in cash. With this huge profit, Intel spent more than $16 billion returning capital to its owners via cash dividends ($4 billion) and share buybacks ($12 billion). In short, shareholders at Intel kept 80% of the profits.

Please make sure you understand what this means… Intel is a $100 billion business. The current shareholder yield (cash and share buyback) is now over 16%.”

Industrial Commodities Breaking Down? What Does That Tell Us About Global Growth?  Precision Stock Picks

I have always wanted to see a non-seasonally adjusted housing starts chart: 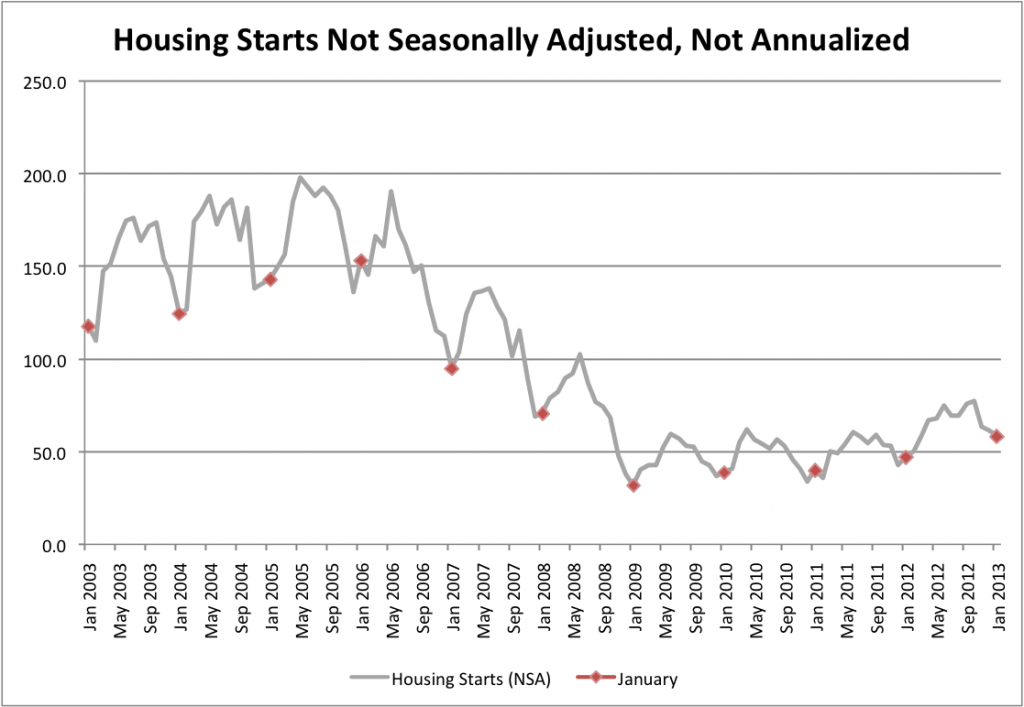 I am looking at writing some individual stock essays.  They demand time and which shall cut into posting…