The secular precious metal bull market is over.  Fundamentally inverse are two shocking and positive headlines I did not expect to see in 2013:

Reasons Why Stock Market Bull Run Has Farther To Go (IBD) vs. Growls Keep Coming From the Bear’s Den (WSJ).

Manufacturing index points to 2-3% GDP growth (Scott Grannis) vs. Complete confusion over the trajectory of the US manufacturing sector (Sober Look).

“The past relationship between the PMI™ and the overall economy indicates that the average PMI™ for January through March (52.9 percent) corresponds to a 3.3 percent increase in real gross domestic product (GDP) on an annualized basis.”  ISM 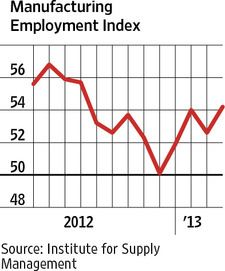