As a leading indicator, Gold (priced in Swiss Francs) has begun the next leg of its bull trend by Peter Brandt.

Does $100 silver sound outrageous?  A tempered and measured look:  Gold Silver Worlds.  David Morgan: The Silver Supply Squeeze In 1980 Could Look Like A Warm-up also at GSW.

Chart of the Week: Gold and an Ever-Growing Balance Sheet by Frank Holmes.

“Although (Obama) is no fossil fuel friend, natural gas may get a boost in the next four years, despite Democrats’ perception as strong environmentalists,” Global Hunter Securities analysts said in a research note…An Energy Department study of the economic effects of expanded liquefied natural gas exports was initially expected to conclude this spring but was delayed and is now likely to be issued before the end of the year.”  Fuel Fix

Line of the day:  “After Sandy, No One Lined Up for Wind Turbines.”  Mark Perry

“Will the U.S. Really Become a Crude Exporter?”  Raymond James

China’s October Crude-Oil Imports up 13.9% on Year at the WSJ.

Many companies dependent upon the industrialization of China are openly looking for, hoping for and expecting an immediate China stimulus program.  Not Rio Tinto.  Mining Weekly

Material investors know copper is the most supply constrained of the base metals and bulk commodities.  Global Copper Production Under Stress at Resource Investor.

The four BRIC nations “generated close to half of the world’s GDP growth in the past decade” with Chinese GDP expect to dwarf the U.S. by 2050 (Sober Look).  Further, China, India GDPs to Exceed Entire OECD by 2060 at CNBC.  ISA question:  Does the planet have the natural resources for the project development to occur? 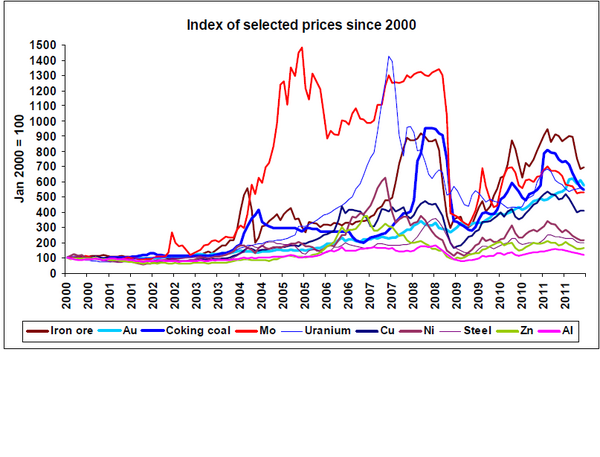 Without getting political, from GaveKal via John Mauldin: