Europe is still a mess, even mighty German saw Q4 growth go negative (Reuters), but European spreads continue to get better (Josh Brown).  Meanwhile stateside, 2013 Outlook:  Why The SPX Will Be Up For A 5th Year In A Row (Schaeffers).

“(F)our factors combined to generate a sharp increase in world demand for  commodities: rapid growth in global GDP, increasing urbanization in developing  countries, a rise in population at a rate of 800 million people per decade, and  a significant decrease in poverty. With the exception of global population  growth, China has been the most dynamic country in all of these respects.”  Shall this continue?  Project Syndicate

However:  ” Short seller Jim Chanos sees big trouble brewing among leveraged natural-gas producers. Why he still views China as a bubble and is wary of Brazil’s Petrobras and Vale, too.”  Barron’s

“Copper and tin are likely to be the biggest near-term beneficiaries of improved apparent demand through the first half of 2013, with supply availability still limited, Macquarie said in a research note Friday.”  Platts  China’s 2013 refined copper consumption to rise 5.5% to 8.1 mil mt: Antaike at Platts. 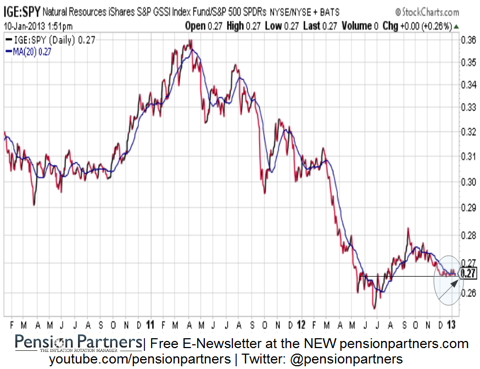 China’s 2012 trade surplus surges 48% (CNA), thus “China’s overseas investments neared $80 billion in 2012, according to the latest
tally by the Heritage Foundation, a conservative Washington D.C. think, and may well hit $100 billion a year in the coming years.”  WSJ

We shall keep a close eye on China (Business Spectator). An MLP blog to bookmark for those interested in the space:  MLP Guy.